The building was built in 1873 as a mansion for the Zimmermann family by architect Wilhelm Neumann. Following its conversion by the architects Rudolph Speer and Heino Schmieden in 1891/92, who added a story and an annex, the businessman Egon Sally Fürstenberg (1860-1942) purchased it in 1904, who again had it rebuilt and expanded by the architects Hoeniger and Sedelmaier in 1924. In 1938, Egon Sally Fürstenberg was forced into emigration due to his Jewish faith, resulting in the sale of his house to the Association of Berlin Artists (VBK), which was ‘gleichgeschaltet’ – put under Nazi-approved direction – at the time. In 1943, the building was badly damaged in bombing raids over Berlin’s city center and gutted by fire. The library and the archive of the VBK, founded in 1841, was lost as a result. After the war, the house was put on the demolition list, like most of the surrounding buildings. Through the personal intervention of the German-Russian painter Nikolaus Sakrekow, chairman of the exhibition committee of the VBK, a reconstruction permit was obtained. Under his supervision, two floors of the front part of the building were restored, so that in February 1950 the “Kulturzentrum [Culture Center] Lützowplatz”, as it was called in the press, was opened. In the following decades, the second floor of the house was used as a district gallery by the Tiergarten Office for the Arts, showing widely acclaimed exhibitions of works by artists like Vincent van Gogh (1953), Oskar Kokoschka (1956), Marc Chagall (1957) or Paula Modersohn-Becker (1960). On the first floor, the graphic cabinet of the VBK opened again in April 1950 with an exhibition of famous former members like  Menzel and Lieberman. 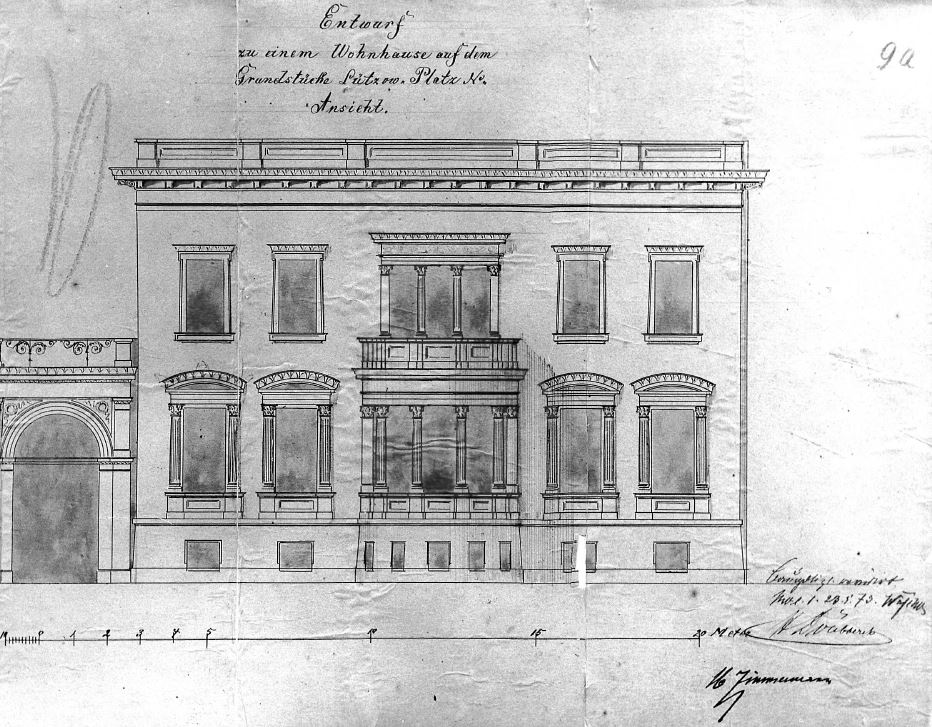 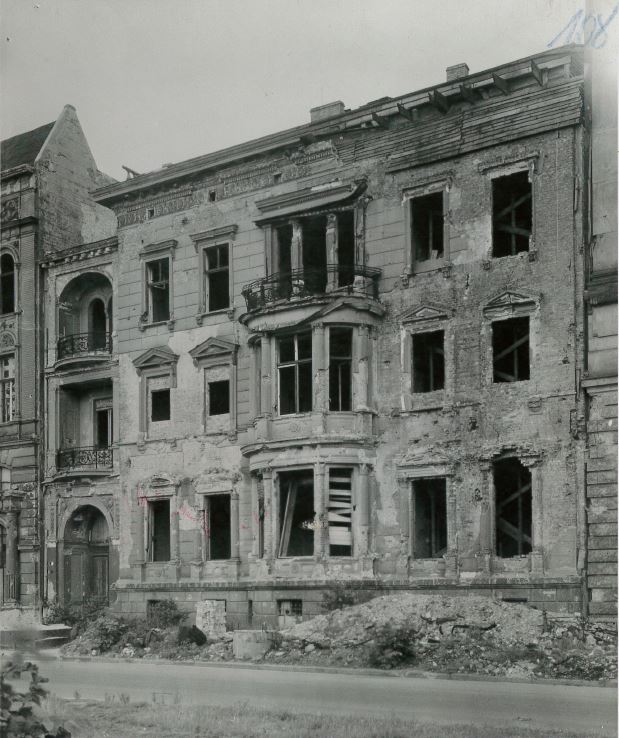 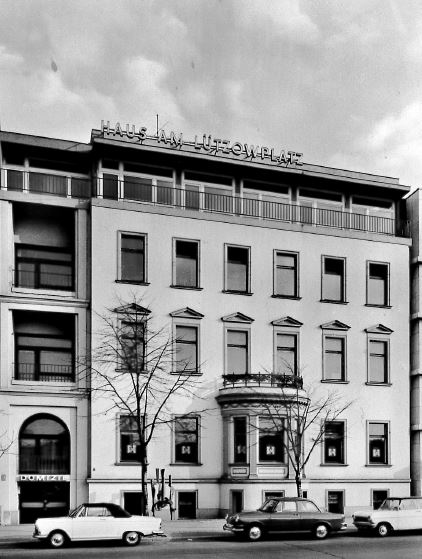 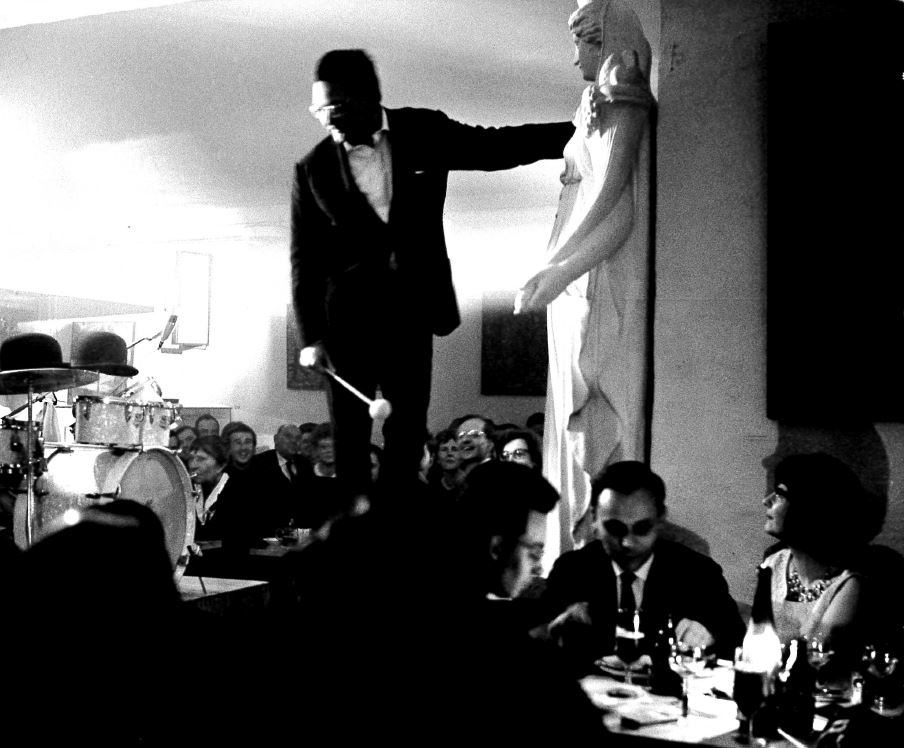 Wolfgang Neuss at Domizil circa 1965 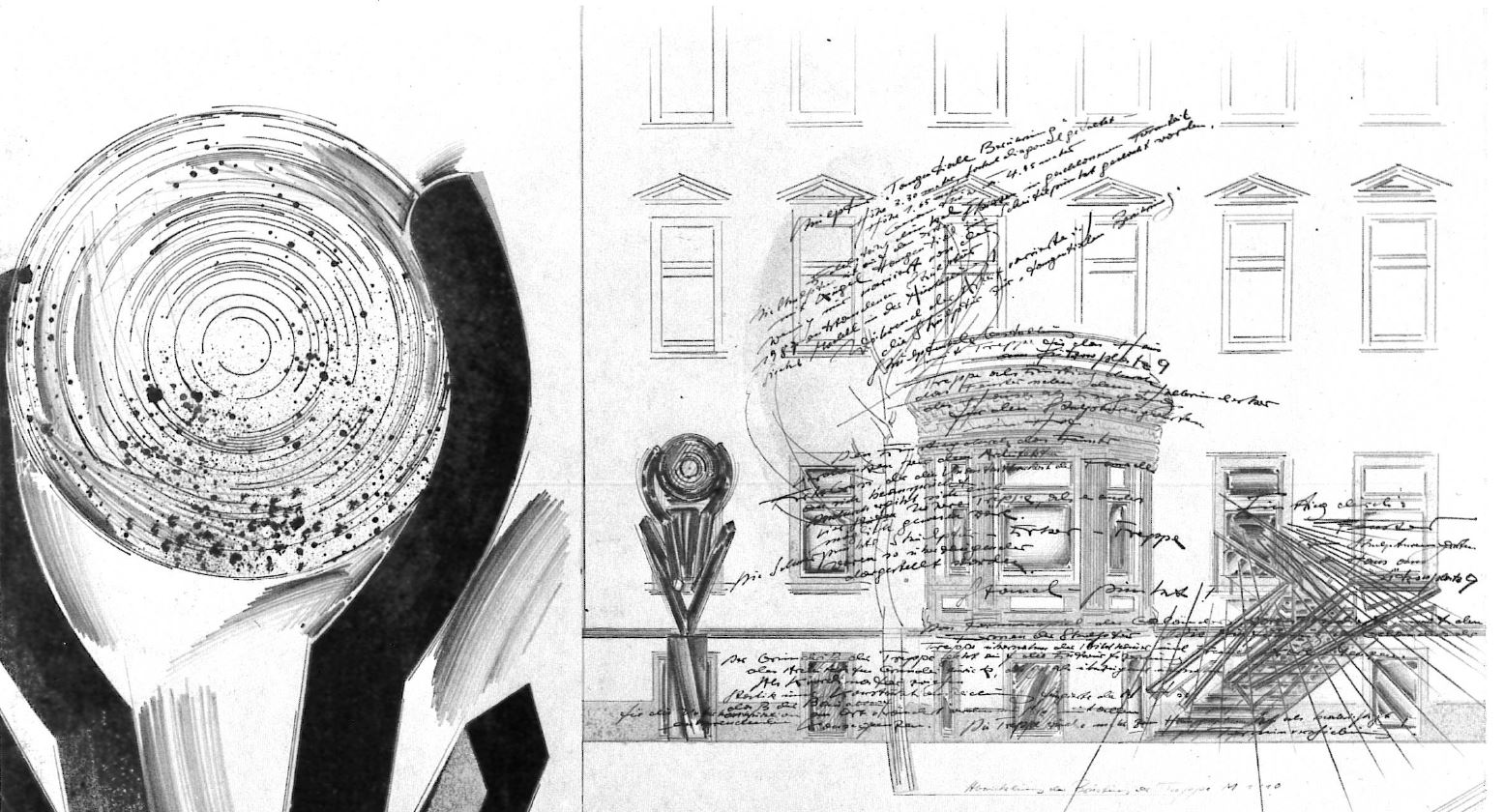 Sketch of the portal and stairway sculptures by Volkmar Haase 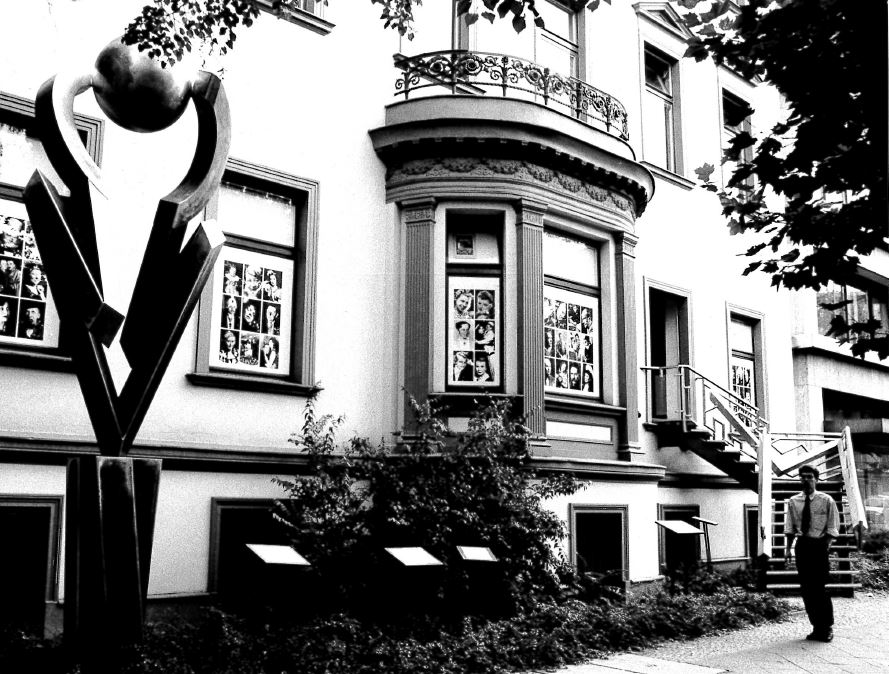 After a court ruling in December 1959 that clarified the disputed ownership between the Fürstenberg heirs and the VBK, the sale of the property to the „Fördererkreis Kulturzentrum e.V.“ became effective in February 1961 by payment of the balance. As its own first exhibition, the Fördererkreis organized a show with Illustrator and graphic designer A. Paul Weber at Haus am Lützowplatz in February 1962, followed by an exhibition with modern poster art in April 1962 and a solo exhibition of Tomi Ungerer in May 1962. With the support of the Stiftung Deutsche Klassenlotterie,   extensive reconstruction and renovation work began under the supervision of architect Fritz Gras who added yet another floor to the street-front wing and divided the courtyard building into a variety of units for use as a guest house. During the construction period, the Fördererkreis organized several exhibition projects in other venues, among them rented rooms at Kantstraße 165, operated under the name  “Gallery at Gedächtniskirche”, or in the foyer of Freie Volksbühne on Schaperstraße. Its director Erwin Piscator became a member of the Fördererkreis later on.

With works from the collection of the Modern Gallery of the city of Krefeld, the re-opening of Haus am Lützowplatz took place on November 18, 1963. At the same time, paintings and graphic works by the artist Martin Schmidt were shown in the “cabinet” on the 4th floor and in the gallery at “Domizil” in the basement, an exhibition with “serial paintings” by the Basel artist Karl Gerstner was presented.

The Tiergarten Office of the Arts remained a tenant on the second floor of the building until 1995 and cooperated with the Fördererkreis in various exhibition projects in this period under its artistic directors Friedrich Lambert and Paul Corazolla. The VBK however remained a tenant only briefly, on the third floor where its offices and exhibition space were located, giving up this venue and moving its headquarters to a new space at Schöneberger Ufer 57 in 1964, where it is located to this day.

In the beginning, HaL saw a political role for itself as a meeting place in the sense of a culture club. It also accommodated groups of visitors in the separately run guesthouse, confronting them with Berlin’s East/West predicament. Civic education was seen as an essential task, going it alone at first, then delegating this effort to the DGB unions federation, and finally – until the Wall came down – to the Paul Löbe Institute.

In the 1960s, the activities in the “Domizil” restaurant bar in the basement of the front building were seminal for HaL’s public perception. “The Man with the Drum” Wolfgang Neuss performed here more than 700 times. From 1999 onwards, operations were relaunched in the form of the „Trompete“ club, with Ben Becker and Dimitri Hegemann as founding members.

In 1978 the Studio Gallery was opened as a new exhibition space in the framework of a smaller reconstruction of the ground floor of the courtyard building, which was previously used as a caretaker apartment.

In 1988, a new entrance was created by Volkmar Haase, with a stainless-steel stairway leading through a window of the façade. The work was carried out together with Haase’s Assistant Karl Mentzen and was combined with the installation of a five-meter-high abstract portal sculpture near the old main entrance. The courtyard garden with a terrace and ramp was redone at the same time.

In 1992/93, the exhibition floors were renovated and the building formerly used as a guest house was converted to offices. These areas had been leased to the Cooperative Association of Berlin-Brandenburg until 2002.

From 1994 on, HaL no longer received institutional funding from the State of Berlin, instead financing its exhibitions and events program primarily from building management. The current tenants include the Cultural Foundation of the States, the Federal Cultural Foundation, the Association of German Amateur Theaters, the Fonds of the Performing Arts and the film production company Medea.