Lützowplatz was created during the Gründerzeit era and was named in 1869, in the context of the naming of the squares and streets of the Generalszug – a major array of streets commemorating the German campaign in the Napoleonic Wars – after Prussian major-general Baron Ludwig Adolf von Lützow (1782-1834), who had spent the last years of his life nearby on Tiergartenstraße, corner of Stauffenbergstraße. Von Lützow founded and led a corps in 1813-15 that fought French troops behind enemy lines during the “wars of liberation” against Napoleon. These so-called “Black Hunters” or “Lützow’s Wild Bunch” were not very significant militarily, but gained legendary status within the framework of the German nationalist movement. The colors of their uniforms were the inspiration for the costumes of the “Urburschenschaft”, from which the three colors of the German flag were derived.

Lützowufer and Lützowstraße, two streets connecting to the square, had already been named for the former town Lützow (or Lietzow) which turned into the new city Charlottenburg in 1719. After the construction of a wooden bridge over the Landwehrkanal in 1850 (replaced in 1889/90 by the stone Hercules Bridge), the southern Tiergarten district was incorporated into Berlin in 1861. From the 1870s, Lützowplatz evolved into a favorite residential area of the ‘New West’, with architects like Richard Lucae (1832-1877), Adolf Heyden (1838-1902) and the atelier community of Hermann Ende (1829-1907) & Wilhelm Böckmann (1832-1902) applying themselves to its development. City villas in a late classicist style first emerged on the eastern side of the square, its other sides were developed subsequently until the 1890s. Due to the increasing development of the ‘New West’, the square took on a central role as an intermediary between north and south Berlin and also between the old mansion district in Tiergarten and the new Schöneberg and Charlottenburg districts along the ring roads. Lützowplatz was a mark point on the axis between Großer Stern and Nollendorfplatz.

In 1894, the construction of a fountain on Lützowplatz was proposed to remodel it as an “ornament square”. The sculptor Otto Lessing (1846-1912) was commissioned with the design of the fountain in 1896. After extended planning and construction phases the fifteen-meter-high Fountain of Hercules, whose lowest bowl had a diameter of fourteen feet, was unveiled in 1903. In early 1945, it was destroyed during the bombing campaigns over Berlin’s city center.

Louis Touaillon’s sculpture “Hercules and the Erymanthian Boar” was placed on Lützowplatz in reference to Lessing’s fountain in 1967. The sculpture was created in 1904 and a posthumous cast was made 1937 in the foundry of Hermann Noack, commissioned by Touaillon’s son-in-law, the architect Paul Baumgarten. A few meters away at the edge of the sidewalk, is a multi-figure bronze group by Sabrina Grzimek that was purchased by the East Berlin magistrate in 1986 and stood in the pleasure garden in front of the Old Museum until after 1990. In 1995, it was placed on Lützowplatz by the Tiergarten district council on initiative of the Poll Gallery. The three sculptures near the Lützowstraße intersection were created in 1990, in the course of a sculptors symposium organized by the Tiergarten Office of the Arts. The sculptures are works by Volker Bartsch, Ernest Altés and Udo G. Cordes. Originally another piece by Hartmut Stielow stood here as well, but it was moved by a few hundred yards and now is located in front of Galerie Nothelfer. 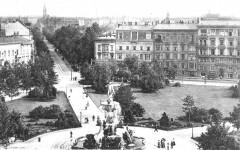 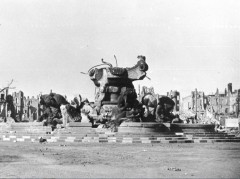 The ruins of the Hercules Fountain, 1945. 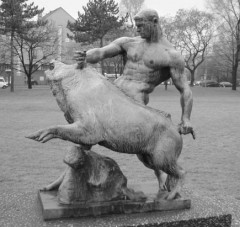 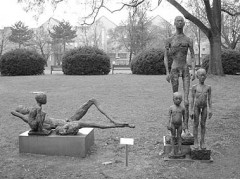