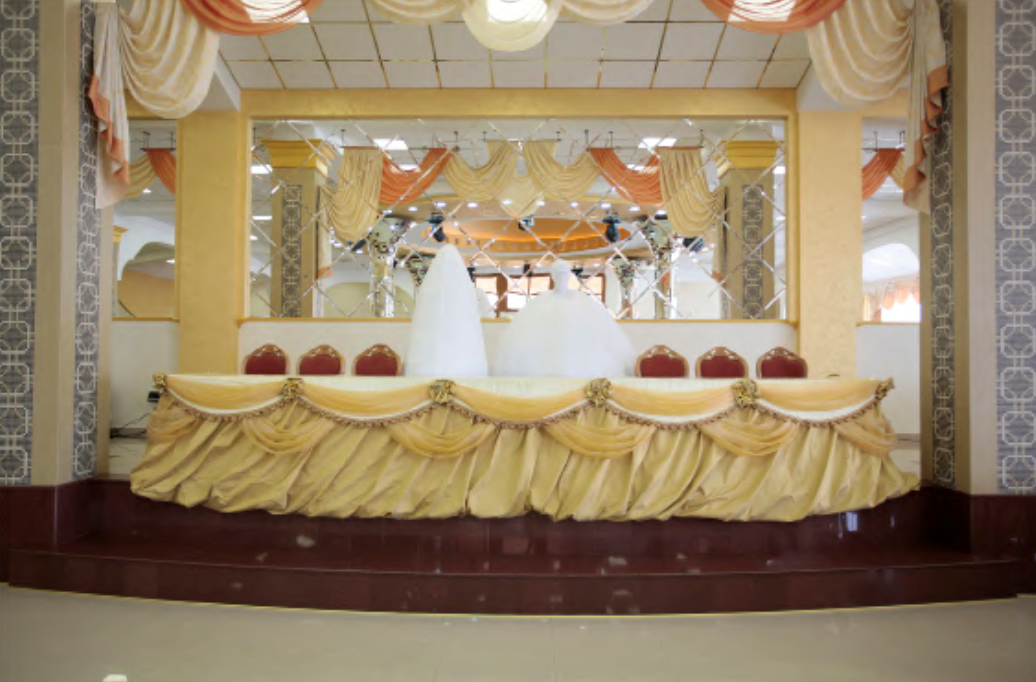 “Astonish me!” With these words, the Russian impresario Sergei Diaghilev describes the universal power of Russian cultural heritage.

The Western world was famously introduced to the Russian culture at the beginning of the 20th century by Sergei Diaghilev, an art critic and ballet impresario. Known under the famous title „Ballets Russes Company“, he organised and launched a series of major art exhibitions and performances across Europe. It was Diaghilev’s dream to bring Russian culture to the West and create a world of art in which décor, costumes, music, and expression were one harmonious whole. In one world – it was a celebration, an act, in which Russians are real virtuosos.

As the title proposes the exhibition Ceremony: Russian Seasons, The Wedding is following in Diaghilev’s footsteps of promoting Russian culture. Diaghilev’s achievements are priceless and yet we see mainly male names in the history of the 20th century art associated with Russia. The exhibition Russian Seasons: The Wedding symbolises a new stage in the formation of Russian culture in a woman’s face, whose activities have been hidden in the shadow of the masculine society. Ironically focusing on the theme of the Ceremony of the Wedding, another dance and a celebration like a ballet,  the following exhibition is bringing together a new generation of female Russian artists re- thinking the role of the modern women in the Eastern society.

Historically, a wedding has long been considered the most important event in the life of a Russian woman, whose role was defined by serving and making the life of her husband and future children. The wedding as a system of ceremonies that consolidate marriage took its final shape in Russian culture by the 15th century. Young girls were prepared from a very early life-stage for their future marriage and had to acquire all the necessary skills to run the future household, which included cooking, sewing and taking care of the family. Among the Slavs, marriage was one of the most important social institutions and was accompanied by numerous rituals that were filled with certain motives and symbols.

Despite the rapid growth of the worlds’ economy, a shift in paradigms and in traditional roles in modern Russia, marriage is still to be considered the most important event for female „self-realisation“. A modern Russian woman is expected to be well-educated, develop a successful career, have a perfect appearance, and take care of the household and the family. This exhibition that symbolically takes place in Europe symbolises the farewell to the shackled old ideas, praises Russian traditional heritage and announces a new chapter for a woman in the eastern society. The new role that a woman has achieved in Russia by 2021 is stated in the artistic statements by Russian female authors.

Yulia Belousova is a Moscow-born, Berlin based writer and curator.

In 2015 she founded the non-profit exhibition series Ephemeral Dinner and the Art Residency in South of France, Ephemeral Residency. Belousova’s curatorial production focuses on the ethic of social engagement, inviting viewers to inhabit and activate her work.

In 2020 she initiated a series of shows by Russian female artists united ander the title GIRLGIRLGIRL.

She has been part of the Curatorial Board of The Others Artfair Turin, where she served as Programming Director in 2018, as well as Cultural Events Programming Manager for Soho House Berlin. She is VIP Ambassador for Contemporary Istanbul artfair, cultural advisor to Nike Russia and co-founder of Moscow Kunstverein „DINAMIKA”, where she curated the inaugural show by Christan Falsnaes.

She collaborated with galleries and institutions in Europe and NYC, Schinkel Pavillon Berlin, Diehl Gallery, Richard Taittinger NYC, Cambi x Phillips on Gio Ponti and Embassy of the State of Qatar to the Russian Federation, Galerie Charraudeau Paris.

She is also a regular contributor for Buro247, Harper’s Bazaar Art Russia, The Art Gorgeous Magazine, #Hstory, Forbes Russia and The Arts of the Working Class. She is lecturing on the topic of relational aesthetics, recently at Cosmoscow Artfair, CODE Artfair in Copenhagen and The Others Artfair, Turin.

This website uses cookies to improve your experience while you navigate through the website. Out of these cookies, the cookies that are categorized as necessary are stored on your browser as they are essential for the working of basic functionalities of the website. We also use third-party cookies that help us analyze and understand how you use this website. These cookies will be stored in your browser only with your consent. You also have the option to opt-out of these cookies. But opting out of some of these cookies may have an effect on your browsing experience.
Necessary immer aktiv
Necessary cookies are absolutely essential for the website to function properly. This category only includes cookies that ensures basic functionalities and security features of the website. These cookies do not store any personal information.
Non-necessary
Any cookies that may not be particularly necessary for the website to function and is used specifically to collect user personal data via analytics, ads, other embedded contents are termed as non-necessary cookies. It is mandatory to procure user consent prior to running these cookies on your website.
SPEICHERN & AKZEPTIEREN