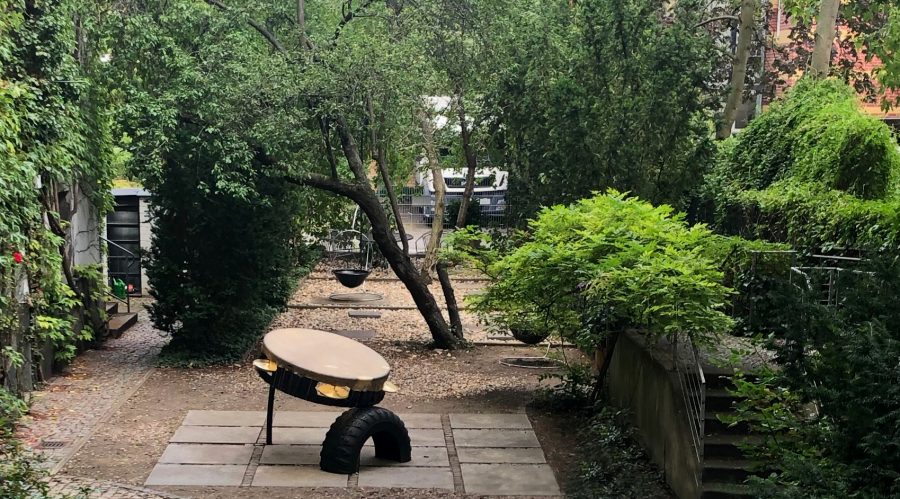 Experimental concert with Alexander Iezzi on „Tambourine“ by Viviana Abelson

In the frame of HaL Hofskulptur #5  Gravity, Alexander Iezzi will perform the large Tambourine, a tuning collaboration on the main piece of the sculpture’s exhibition.

Since the concert takes place in the garden-backyard of HaL Haus am Lützowplatz, there will be plenty of space to enjoy safely the performance.

Viviana Abelson (Buenos Aires, 1985) graduated from Städelschule in 2018 from Filmklass with Prof.  Douglas Gordon. Previously attended Prof. Josephine Pryde’s class at UdK. Her most recent solo  exhibitions include Silver Glaze at Nassauischer Kunstverein Wiesbaden (Wiesbaden 2019) Edible at  Graf von Westphalen (Frankfurt, 2019) and Sol de Noche at Zmud Projects (Buenos Aires, 2018). Her work has been shown in group exhibitions such as And This is Us Frankfurter Kunstverein, (Un-)  Real E-state 3HD Festival Berlin, Sinkhole Tor Art Space, After Rubens Städel Museum, Self bites  Self Kunstverein Göttingen among others.

Alexander Iezzi (*1987, Tucson, Arizona, USA) is an artist, musician, performer, organizer, and garage psychologist based between Rotterdam and Berlin. Iezzi’s practice is centered around the construction of processing stations in which both people and/or materials can be passed through, disintegrated, and transformed into instruments, figures, sounds, environments, and images. Within these stations, artworks, play, and imagination are utilized as technologies to explore the construction of moral frameworks and political ideologies. Recent exhibitions, performances, and workshops have been held at Witte de With Center for Contemporary Art, Rotterdam; Watermill Center, New York; Peach, Rotterdam; Ku’damm Karee, Berlin; Kantine, Brussels; 427 Gallery, Riga; and Bologna.cc, Amsterdam.

As a producer, Iezzi creates music and radio under the alias Mary Posa in addition to his given name. Past music and radio collaborators include Billy Bultheel, Ivan Cheng, Anni Puolakka, Viktor Timofeev, and Daphne Xanthopoulou. Iezzi’s radio work has recently appeared on Noods Radio, Radio Klangendum, RAAR, and TeslaFM.